Well, smell! How scientists use the sense of smell of animals for the benefit of humans 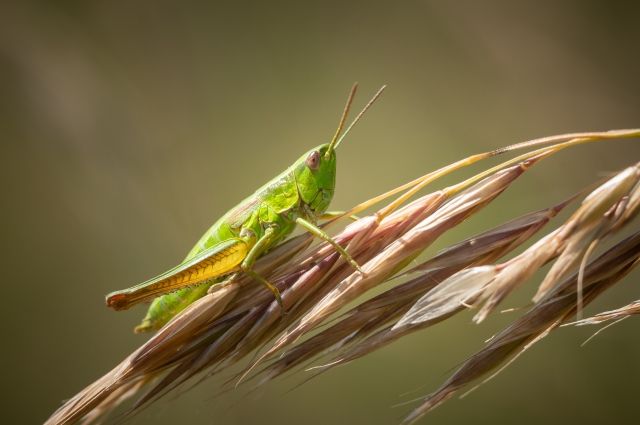 Scientists have discovered that locusts are able to smell cancer cells and distinguish them from healthy ones. Moreover, she knows how to distinguish their different types by smell. Now these data are used to create new medical diagnostic devices: a tumor in patients can be detected at an early stage by analyzing the composition of the air they exhale. benefit to man.

Locust research was conducted at the University of Michigan (USA). The scientists surgically opened the insect's brain and inserted electrodes into the areas of the insect that are responsible for the sense of smell. The locust was alive, but, as entomologists assure, it does not feel pain, so the animal rights activists (if they are now alarmed) should not worry. On the other hand, after such a procedure, the insect is no longer a tenant in the world, but what can you do — this is the fate of almost all laboratory animals.

For the experiment, the scientists grew three different types of cancerous and healthy cells from the human mouth. Experts know that cancer cells release many unique chemical compounds as they grow. If you manage to catch them in the air exhaled by a person, cancer can be detected at an early stage.

After growing the cells, the researchers took a device to capture the smell given off by each of the specimens and gave it to the locusts to sniff it. A then analyzed the results. It turned out that the experimental insects distinguished all three types of cancer cells. The instruments showed distinct changes in their brain during this procedure, and the brain responded differently to each cell type.

The researchers emphasize that this is the first time insects have been used to identify cancer. Now they intend to find out which receptors on locust tendrils react to the smell of cancer cells in order to create their synthetic counterparts in the laboratory, and then make an analyzer based on this natural model that has existed for millions of years. Although the results were obtained only for oral cancer, scientists are confident that this method will be useful for diagnosing other types of it, because most malignant cells secrete odorous substances.

When it comes to using the sense of smell of animals for the benefit of a person, dogs are first of all remembered. It is well known that they are able to find various types of explosives, narcotic substances. During the Great Patriotic War, thousands of four-legged bloodhounds worked as mine detectors. The legendary shepherd Dzhulbars over the years of service discovered almost 7.5 thousand mines, helping to clear buildings not only in the USSR, but also in Hungary, Czechoslovakia, Romania, Austria.

In our time, service dogs can be found at customs control points, where they help in the search for drugs and explosives. And the latest research shows that these animals can be trained to detect people with coronavirus infection with high accuracy. Such a skill will come in handy at airports where the flow of passengers is very high and medical devices (non-contact thermometers) cannot handle it.

There were several experiments. Dogs were allowed to sniff samples that smelled of the sweat of people who tested positive for COVID-19. Then they tested whether they could detect coronavirus patients in a large sample of volunteers, several hundred people. Overall diagnostic accuracy was 92%. Dogs even identified those patients who did not show any symptoms.

Between September 2020 and April 2021, several dogs trained to search for the coronavirus were tested at Helsinki International Airport. Each passenger there took a PCR test, and it turned out that the results of medical testing and"canine" matched by 98%.

Scientists suggest that, penetrating into the cells of our body, the coronavirus breaks down certain molecules, and their decay products form volatile compounds present in sweat, saliva and exhaled air . They are probably what the supersensitive dog's nose catches.

We know about the fact that dogs have a phenomenal sense of smell because we have been living with them side by side for more than one millennium. And after all, in the animal world there are even more gifted “sniffers”, and these are the very insects with which we started.

If in the USA the ability to find cancerous tumors is tested on locusts, then in France brown forest ants are trained on the same skill. The experiments were carried out at the National Center for Scientific Research (CNRS). Scientists have grown «in test tube» tumor cells of two forms of breast cancer and trained ants to identify them by their volatile organic compounds, separating them from healthy ones. It only took a few attempts to learn.

“In terms of the ability to notice smells, ants turned out to be no worse than dogs, which are the most famous” biodetectors “,” & mdash; the authors of the work write in a scientific article.              is superior to dogs in some aspects, because it requires less time for training (half an hour instead of 6-12 months) and funds for maintenance (honey and frozen insects twice a week). A simple training protocol can be implemented by anyone after a couple of days of training.

True, “service life” one trained ant is limited: as the experiment showed, it can be used up to 9 times, after which the olfactory abilities of the insect degrade. Then, scientists say, you need to move on to the next thing.

Despite the excellent results of the study, it is still not entirely clear how this diagnostic method can be used in clinical practice.

Despite the fact that dogs were massively used during the war to detect mines, sappers from them are not always reliable. Having found explosives, the dog may begin to rejoice and make an extra movement. Or accidentally step on a mine, and its weight will trigger the device.

Therefore, scientists train other, easier animal     — rats. Their weight is small, feeding and transporting them is easier than dogs. They multiply faster and learn, moreover, not attach to the owner and can work with anyone.

There is an organization in Belgium that specializes in training Gambian hamster rats. They are taught to identify explosives by smell and give a certain signal. Such assistants proved to be indispensable in countries where hostilities have recently been fought and many shells and anti-personnel mines have been left lying in the ground. So, since 2000, scientists have prepared three dozen rodents that helped to neutralize territories in Mozambique and Tanzania. clique Magawa. He participated in clearing the territory of Cambodia, where after a long civil war there was a huge amount of unexploded ordnance. Over the years of his service, the rodent helped to find 71 anti-personnel mines and several dozen shells. True, Magawa died in January of this year, but not from explosives, but from old age. He was already 8 years old.