Robot in the village. Rural schoolchildren will be introduced to new technologies 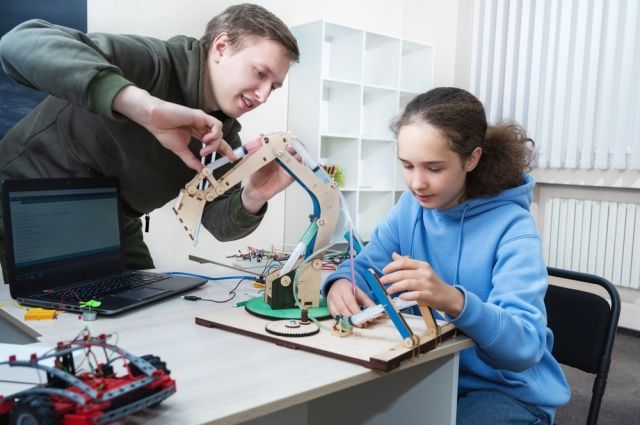 More than 9500 educational centers for children “Point of Growth” in villages and small towns they work all over the country. A few more will open from 1 September. And until the end of 2024, over 24 thousand people will work in Russia. such centers at schools.

“Points of Growth” began to create in schools of villages and small towns with population up to 50 thousand people. people starting from 2019 under the national project "Education". There, children get acquainted with modern technologies and try themselves in unusual areas — designing quadcopters, working on 3D printers, creating cartoons and animation. At life safety and technologies lessons they are taught to provide first aid on simulators and dummies, boys — work with screwdrivers and other modern tools. Ensuring the possibility of self-realization and development of talents — one of the most important national goals set by President V. Putin.

Point of Growth Centers — typical, for them allocate premises in the schools themselves or erect additional extensions or buildings. They work as centers of additional education in the natural sciences, technical, humanitarian and digital profiles.

Thanks to the national project “Education” by end of 2021  more 48% of students in rural schools and small towns studied at "Points of Growth" this year it will open on the basis of the Verkhnegnutovsky secondary school of the Chernyshkovsky district. There are already such centers in six schools in the district.

Now, in the  Verkhnegnutovskoye school, renovations are underway in two classrooms, which will be equipped in two profiles: chemistry-biology and physics-technology. New equipment has already been delivered to the school — two laboratories in chemistry and physics, laptops, and also for robotics. The  classrooms will have modern school furniture, as well as a recreation area.

At the lessons of biology, chemistry, technology and physics, children will find many interesting discoveries. Schoolchildren and teachers in anticipation», — shared the principal of the Verkhnegnutovskoye secondary school Larisa Korotkova.

In Samara Region "Growth Point" Starting from 1 September, will start working at a school in the village of Gerasimovka. Equipment for physics, chemistry and biology, robotic kits have already been delivered, the renovation of the premises is nearing completion.

In Tambov region thanks to the national project “Education” Starting from the new academic year, the Center for Education of Natural Science and Technology “Point of Growth” will open its doors for schoolchildren. on the basis of the branch of the Novolyadinsky school in the village of Bolshaya Lipovitsa. There will be modern classrooms for chemistry, physics and biology. Laptops, a robotic constructor with block programming and a set of sensors, an educational kit in mechanics, mechatronics and robotics, a digital microscope were purchased for the children. Teachers completed courses on the program “Use of Modern Educational Equipment in Education Centers of Natural Science and Technological Orientation” on the  platform of the Academy of the Ministry of Education.

The Yumanai secondary school of the Shumerlinsky municipal district will be transformed in Chuvashia. It will open new classrooms in physics, chemistry and informatics of the “Point of Growth” center. Thanks to this the new school year for schoolchildren will be many times more interesting than all the previous ones, and knowledge of physics, chemistry and computer science — more in-depth, I'm sureschool director Galina Fedorova.