Greece lifted fighters into the air to intercept a passenger liner 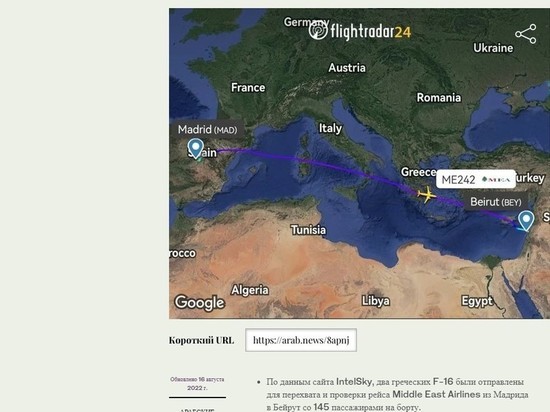 Two F-16s were scrambled after a Middle East Airlines flight from Madrid to Beirut with 145 passengers on board The plane did not respond to radio messages, the aircraft-tracking website IntelSky said on Monday.

“There were reportedly several attempts to contact the aircraft, but no response was received via radio, which is particularly alarming,” it said. in a series of IntelSky tweets about the August 10 incident.

As a result, the NATO air traffic control center in Spain sent an alert to the Greek authorities. According to media reports, a “Renegade Code” was issued, which is a distress signal, usually used to indicate that an aircraft has been hijacked.

Greek authorities sent two F-16 fighters to intercept and check the aircraft. They did so and decided that there were no problems to worry about.

IntelSky said it is believed that pilot Abed Al-Hout, the son of Middle East Airlines chairman Mohammed Al-Hout, forgot to set the cockpit instruments to the correct frequency, which is why he did not respond to greetings. The incident did not go unnoticed by residents of the Greek region of Argos, some of whom reported strange sounds to the fire department that sounded like explosions, but they were fighter jets