What kind of BMP-3 with artificial intelligence was created in Russia?

In August, a combat robot based on the BMP-3 will be demonstrated for the first time. This combat vehicle, which was born by crossing a conventional transport platform and elements of artificial intelligence, was the result of many years of work of two Rostec enterprises “High-precision complexes” — Kurgan machine-building plant and VNII “Signal”.

The new robot is a hybrid of the BMP-3 tracked chassis and the new remote-controlled modern combat module Sinitsa, they are planned to be installed on the promising Kurganets infantry fighting vehicles. under the control of artificial intelligence. The robot actually received technical vision, as it is completely covered with integrated panoramic sights, all-round cameras and various sensors and meters. This is the basis for the traffic planning subsystem, with the help of which the route is set based on the received data. With the help of sensors, the robot will be able to collect data on the environment, landscape, road surface hardness and build a 3D map, while artificial intelligence will form a route.

Paired with a drone

Weapons of a crewless combat vehicle for infantry fighting vehicles — this is one of the most common 30mm cannons — 2A42 and the modern anti-tank complex “Kornet”. This weapon has proven itself well and has acceptable characteristics. Particular attention should be paid to the aiming systems, the optoelectronic complex, which is the basis of the fire control system, is responsible for accuracy. Its capabilities make it possible to observe targets simultaneously in all spectral ranges and in various modes. Even hidden objects can be detected by a new optical locator that the robot will receive. Also, a reconnaissance drone will be placed on board the robot, which will collect information about targets and transmit target designations to the vehicle. 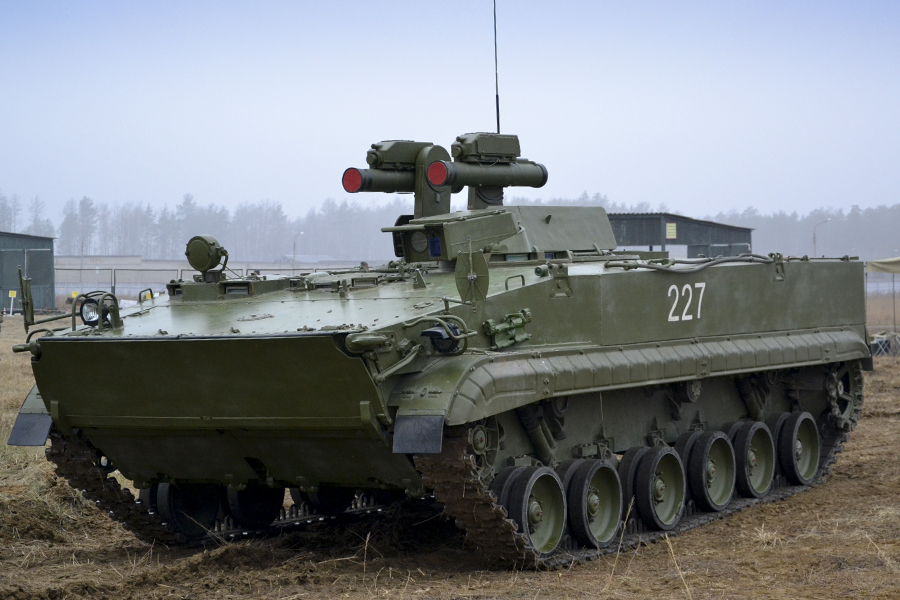 Kornet-T on BMP-3 chassis. Photo: Ministry of Defense of the Russian Federation

One in three persons

In fact, the new combat robot — this is a universal transport platform with the ability to install various equipment and weapons that are required in a given situation. The military department wants to create three robots with different functions. We are talking about a reconnaissance-strike, engineering and transport-evacuation unmanned device. They will act both individually and in a group.

The main task of the reconnaissance and strike robot — destroy the enemy with his weapons, and if his firepower is not enough, then direct attack aircraft and bombers, artillery and other strike systems at the targets. The engineering vehicle will receive a multi-position manipulator and various other devices for removing debris and eliminating destruction, as well as gadgets for detecting and eliminating explosive objects. The robotic transporter will be used to transport ammunition and personnel to the battlefield, and it will also be tasked with evacuating the wounded.

During the show, the combat robot will be remotely controlled by the operator. In addition, according to manufacturers, he has the option of moving completely offline without human intervention. True, when this feature of the machine will be implemented, it is not reported. Theoretically, a power reserve of 600 km will allow the robot to operate deep behind enemy lines. The power unit of the robot — Reliable V-shaped engine UTD-19 with a power of 500 hp, which will allow you to overcome the most difficult obstacles. This motor allows you to reach speeds of up to 70 km/h, which will make the robot a rather difficult target. It is also reported that the car will be able to overcome ditches up to 2.5 meters wide, which means that there are no impassable roads for it.