The United States is escalating the situation around Taiwan: why was the aircraft carrier sent

China and the United States are building up their military power around the Taiwan Strait as tensions rise over a possible visit by US House Speaker Nancy Pelosi to Taipei. The American aircraft carrier USS Ronald Reagan and her strike force, including a guided missile destroyer and a guided missile cruiser, left Singapore heading for the South China Sea. 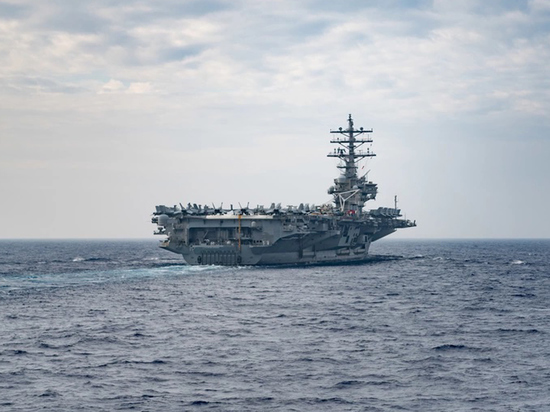 Representatives of the Seventh Fleet of the US Navy confirmed the deployment of the aircraft carrier “Ronald Reagan” on a vital trade route, according to Reuters.

“USS Ronald Reagan” and his strike group continue to operate in the South China Sea after a successful visit to the port of Singapore, — 7th Fleet spokeswoman Haley Sims told Reuters.

Sims added that “Ronald Reagan” “continues with normal scheduled operations as part of its regular patrols in support of a free and open Indo-Pacific.”

Commenting on the actions of the US Navy, the Chinese Foreign Ministry said that the US once again ” flexed their muscles in the South China Sea with the cruise of the aircraft carrier Ronald Reagan.

News of the deployment of the Japan-based U.S. aircraft carrier comes amid an exchange of diplomatic blows between Beijing and Washington over a visit to Taiwan by U.S. House Speaker Nancy Pelosi, reportedly due in August after it was postponed earlier this year. Pelosi has yet to confirm a possible trip.

U.S. Secretary of Defense Lloyd Austin said on Wednesday that he spoke with Pelosi and gave her a safety assessment, but any comments about a trip she might make to Taiwan should come from her office.

Tensions over a democratically ruled Taiwan are expected to be discussed during the fifth phone call between US President Joe Biden and Chinese President Xi Jinping, which could take place as early as Thursday.

China sternly warned Washington about Pelosi's possible trip to Taiwan, Chinese Foreign Ministry spokesman said on Monday. Beijing considers Taiwan part of its territory and has never shied away from using force to take control of the island.

Singaporean security researcher Ian Storey said he expects Chinese ships to follow the US strike group led by Ronald Reagan. “Most of the time these interactions are safe and professional, but there is always a risk that they can get too close and cause a confrontation, — said the expert.

U.S. officials on Tuesday accused China of stepping up “provocations” against competitors in the South China Sea and said that his “aggressive and irresponsible behavior” means that a major incident or state of emergency — it's just a matter of time.

Meanwhile, they are not sitting idly by in Taipei. According to CNN, the Taiwanese military is conducting exercises. They simulate scenarios in which the enemy is trying to seize control of a key waterway near the Taiwanese capital. Attacking from the sea and air, the invasion force, according to the model, aimed at the mouth of the Tamsui River on the northern coast of the island — a strategic estuary providing direct access to downtown Taipei. In response, the Taiwanese military scrambled planes and ground troops set off explosions to stop the advance.

Han Kuan exercises in Taiwan and its outlying islands have been held annually since 1984, and all branches of the Taiwanese armed forces, including reservists, participate in them to improve the overall defense capability.

The drills are also meant to teach residents how to react if Taiwan comes under attack. On Monday afternoon, traffic in Taipei was shut down for 30 minutes and residents took shelter as air raid sirens wailed over the city. Similar drills are being held throughout Taiwan through the end of the week. The island's government said the purpose of the air raid exercise was to educate the public on the location of bomb shelters “in case of war”.

This year's exercise has taken on greater significance amid growing concerns about China's intentions with respect to Taiwan. These fears have escalated since the outbreak of the conflict in Ukraine, CNN notes. Beijing has not ruled out the use of force to control Taiwan and has been putting increasing military pressure on the island by sending aircraft into its self-proclaimed air defense identification zone.

“China demands that the US take concrete action to honor its commitment not to support 'Taiwan independence'” and not organize Pelosi's visit to Taiwan, — Chinese Ministry of Defense spokesman Tang Kefei said Tuesday when answering questions about reports of Pelosi's trip to Taipei.

“If the United States insists on its own, the Chinese military will never sit idly by and will definitely take decisive action to prevent the interference of any external forces and separatist plans for “Taiwan independence”, resolutely defend national sovereignty and territorial integrity,” – Tang added.

Taiwan's Defense Minister Chiu Guo-cheng said last year that China could launch a “full-scale” invasion by 2025, adding that military tensions on both sides of the Strait are at their “most serious” point for more than 40 years.

Russia's special operation in Ukraine and China's refusal to condemn Moscow's actions have fueled rumors about Beijing's intentions. CIA Director Bill Burns said last week that the Chinese are closely studying Russia's actions in Ukraine, calculating “how and when” Beijing may decide on an operation against Taiwan. “I wouldn't underestimate President Xi's determination to assert China's control,” — said Burns.

For his part, Taiwan's former deputy air force commander Chang Yanting told CNN that Taiwan needs to learn from Ukraine in dealing with larger enemy forces and accelerate the development of its asymmetric warfare capabilities. Instead of focusing on conventional weapons such as tanks, Taiwan should develop and procure new long-range missiles that could hit Chinese military facilities in the event of an armed conflict, he said.

Hence, the expert argues , the Taiwanese military should primarily focus its strategy on blocking the Chinese People's Liberation Army (PLA) landings rather than retreating inland and risking battles in densely populated cities.

Commenting on the aggravation of contradictions between China and America, CNN notes that it is Taiwan that has long been seen as the most likely cause of the military escalation between Washington and Beijing. In a complex web of agreements governing relations with China, the White House grants official diplomatic recognition only to the People's Republic of China, but maintains close ties with Taiwan, which is claimed by China.

The US policy on strategic uncertainty leaves it vague about what it will do if China ever invades Taiwan, in part to discourage a formal declaration of independence by the Taipei government. But the U.S. is required by law to offer Taiwan the means to defend itself, CNN emphasizes. measures in the event of a visit by Pelosi. An attack on her planes is unthinkable. But there are rumors in Washington that China might send planes over Taiwan itself — highly unstable scenario, fraught with the possibility of miscalculation.

Given such rhetoric, it would be difficult for China not to take unprecedented action in the event of a Pelosi visit. Xi Jinping has little room to de-escalate ahead of the Communist Party Congress later this year, which is expected to confirm his unusual third term for Chinese leaders.

Biden, perhaps unwisely, showed that the US military is not enthusiastic about the visit of Pelosi, notes CNN. Now, if he convinces the speaker of the House of Representatives not to go, he will be accused of giving in to the Chinese, a charge that no US president can withstand, especially one whose approval rating has fallen below 40%.

Nancy Pelosi, the third most powerful figure in the US government after the president and vice president, has been arguing with China over human rights for 30 years, and she's not the type to be intimidated, CNN says. With the Democrats likely to lose in the House of Representatives in November's midterm elections, she's reluctant to turn what could be one of her last major international appearances to Beijing. According to CNN, the White House, in an effort not to offend the “Democratic icon” and aware of the political sensitivities of trying to forcefully pressure the other branch of government, spoke backstage with Pelosi about the risks of her trip.

But on Capitol Hill, the voices of the “hawks” are heard both on the right and on the left. “We must not let them bluff and dictate to America, the greatest nation in the world, where our Speaker of the House of Representatives should go,” — says Democratic Rep. Ro Hanna of California. – I mean, who are they to say Speaker Pelosi shouldn't go to Taiwan?

Republican Minority Leader Kevin McCarthy says Pelosi “shouldn't back down now.” He also said he would lead a congressional delegation to Taiwan if he became speaker next year, although such a visit would potentially be less explosive than a Democrat Pelosi's because Biden could tell the Chinese that rival Republicans don't represent his policies.

With political tensions on both sides, it's hard to see how Biden and Xi can ease the situation. The situation could become risky if Xi Jinping asks Biden to prevent Pelosi from visiting, CNN predicts. Biden doesn't have the power to do that. But the Chinese leader might take offense if the speaker does go on a trip, further damaging bilateral trust.

An increasingly assertive China is also watching loud bipartisan calls on Capitol Hill to shed strategic ambiguity and simply say that the US will defend Taiwan. Biden certainly didn't help, repeatedly making statements that are against policy, — only for aides to refute them.

Bonnie Lin, director of the China Power Project at the Center for Strategic and International Studies, said the best thing that can happen from a phone call is — it's perhaps some understanding of what exactly China will do if Pelosi goes to Taipei: “Hopefully the Chinese can give us something in terms of understanding how China can respond so that the US and Taiwan can plan the path,” which will not lead to further escalation in this dynamic. But China itself may not yet know how it will react, the expert added. And maybe not interested in taking steps to de-escalate the situation. A lot depends on what Pelosi decides to do.