The results of the negotiations between Erdogan and Zelensky were skeptical

Western media: little progress was made in Lvov

The talks held on Thursday in Lvov between the presidents of Ukraine and Turkey, as well as the UN Secretary General, did not bring much progress, according to Western media. 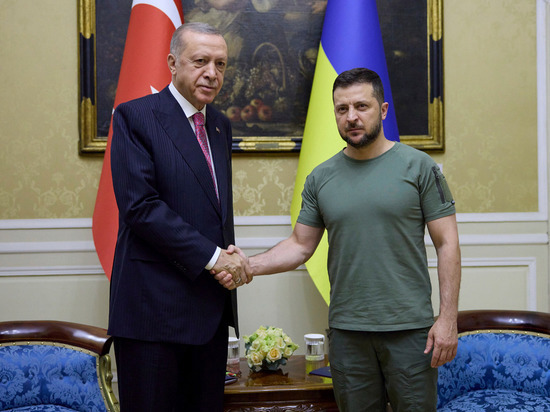 Turkish leader Erdogan and UN chief Guterres met with Ukrainian President Volodymyr Zelensky on Thursday in a powerful bid to end the nearly six-month-long conflict. But the Associated Press, commenting on the results of the negotiations, reports little progress.

Recep Tayyip Erdogan said he would contact Russian President Vladimir Putin, given that most of the issues discussed require the consent of the Kremlin.

In meetings at such a high level – Erdogan's first visit to Ukraine since the start of the conflict and the second visit by UN Secretary-General António Guterres – some hoped for a breakthrough, if not towards a common peace, then at least on specific issues. But so far nothing of the kind is in sight, the Associated Press notes.

At a meeting in Lviv, the negotiators discussed expanding the exchange of prisoners of war and organizing a visit by IAEA experts in ensuring security at the Zaporozhye nuclear power plant, Europe's largest.

Erdogan positions himself as an intermediary in efforts to end hostilities. Although Turkey is a member of NATO, its shaky economy depends on trade with Russia, and Ankara is trying to maintain a middle course between the two opposing sides in the conflict in Ukraine.

The Turkish President urged the international community after the talks not to abandon diplomatic efforts to end hostilities. He reiterated that Turkey was ready to act as a “mediator” and added that he remained convinced that the conflict “will end at the negotiating table.”

In March, Turkey held talks between Russian and Ukrainian negotiators in Istanbul , which did not lead to a cessation of hostilities.

“This area needs to be demilitarized, and we must say it like it is: any potential damage in Zaporozhye is suicide,” UN Secretary General Guterres said at a press conference.

Erdogan also expressed concern about the developments around the nuclear power plant, saying: “We do not want a repeat of Chernobyl.”

Zelensky and the head of the UN on Thursday agreed to conduct an IAEA mission to the nuclear power plant, according to the president's website.

Guterres used the talks in Lvov to appoint General Carlos dos Santos Cruz of Brazil to lead a previously announced UN fact-finding mission on the incident at the Yelenovka prison, where 53 Ukrainian prisoners of war died in a July explosion.

Also on the agenda of the talks held on Thursday was an increase in grain exports. An agreement was reached earlier this summer, brokered by the UN and Turkey, paving the way for Ukraine to export 22 million tons of corn and other grains stuck in its Black Sea ports since the conflict broke out.

The lockdown exacerbated global food shortages, leading to rising prices and heightened fear of famine, especially in Africa, the Associated Press notes. However, even with the deal, Ukrainian grain has only been exported in a trickle — Turkey estimates about 600,000 tons.

Zelensky said on Thursday that he was proposing to increase supplies. Guterres, for his part, touted the operation's success, but added: “There's a long way to go before this translates into people's daily lives in their local bakery and their markets.”