The denouement of ongoing protests in Sri Lanka

The protests in Sri Lanka that began on March 15 as a reaction to the economic collapse of the state have not subsided for several months. The resignation of the government, the election of veteran politician Ranil Wickramasinghe as president did not lead citizens to the expected peace and tranquility, but only strengthened the protest mood and intensified the attempts of the new government to take control of the situation. 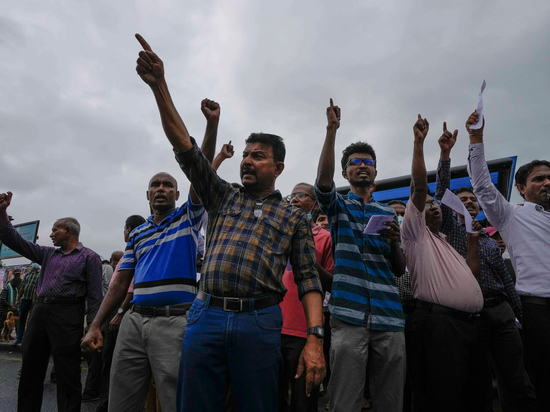 So, on July 17, the acting president at that time, Ranil Wikramasinghe, who replaced the resigned Gotabayu Rajapaksa as head of state, declared a state of emergency in the country, which gave the military fairly broad powers. It allows people to be detained, social gatherings restricted, and private property searched. According to the British press, the state of emergency would have expired on Wednesday if it had not been ratified by parliament.

Following the high-profile arrest of student leader Daniz Ali, who was detained literally on board a plane to Dubai, police reported the capture of two more activists on charges of illegal assembly.

According to Aleksey Kupriyanov, head of the group for South Asia and the Indian Ocean at IMEMO RAS, the protesters are quite scattered, the population often opposes clan politics, which is typical both for Sri Lanka and for the whole of South Asia.

– People think that Vikramasinghe is no better than Rajapaksa. The current president is trying, as it were, to cover up the Rajapaksa clan, to prevent it from being squeezed out of politics, in order to possibly use it for political games in the future.

However, it cannot be said that the current protests have acquired a different meaning. Sri Lanka still has economic problems. The difference between the early stages of the protests and the current situation is only that the activists were initially focused on overthrowing the personality of Rajapaksa. However, when this happened, there was no improvement in the economic situation of the state, and people only blame the person who is now at the helm.

According to the expert, the introduction of a state of emergency is logical and quite effective for the current government, since the level of protests itself has declined. The fact is that some of the protesters who expressed dissatisfaction with the personality of Rajapaksa are now quite satisfied.

According to The Guardian, the protesters also demanded the resignation of Wikramasinghe himself, as they accused the current leader of protecting the Rajapaksa clan . However, according to the expert, if Ranil Wickramasinghe manages to give people light, gasoline, gas, then the conflict may come to naught.

Nevertheless, the assumptions of those dissatisfied with the possible return of Rajapaksa from abroad invisibly, but tangibly, continue to hover in the air. According to foreign publications, his apparent decision to return to Sri Lanka may be partly due to the fact that he has few travel options. Human rights groups and lawyers have said they have been pressuring countries behind the scenes to keep him out. Thus, the US Embassy even refused to issue a visa to the president who fled in the midst of protests.

Aleksey Kupriyanov confirms the expected return scenario, since the Rajapaksa clan still has a fairly strong position in the southern provinces of the country. But it is hardly worth talking about a surge of protest moods.

– If now the clan does not get into big politics, but focuses on its internal affairs, then there will be no serious explosion. And most likely, the Rajapaksa clan will return to politics in one or two electoral cycles.

One important thing is clear in the current turbulence of the South Asian state: people expect a stable life without interruptions in electricity, in sufficient quantities of gasoline, food and other important benefits of civilization. The transition to personal dislike for the current government becomes a reaction to life stagnation and nothing more.

How quickly the uprisings stop, experts do not undertake to say. It all depends on the communication skills of the current Ranil Wickramasinghe.

– Everything very much depends on the actions of those people who are now making politics in the state, – Aleksey Kupriyanov suggests. – It all depends on whether Wickramasinghe manages to stabilize the situation, find the necessary funds and negotiate with resource providers to provide Sri Lanka with new loans. At the same time, it is important not to fall into the trap of Rajapaksa, who took loans without looking back and brought the country into crisis.

The current situation in Sri Lanka is still unstable and unsteady. In the case of the already known protests in this territory, now the ball has gone over to the side of the politicians, in whose hands was a time bomb. The peace of the population will depend only on reasonable steps of the authorities. Otherwise   "bomb" will continue the countdown, which will inevitably end with an explosion. Or it won't end.

Capturing the presidential residence and setting fire to the prime minister's house: footage of the revolution in Sri Lanka