“This is some kind of psychiatric illness” 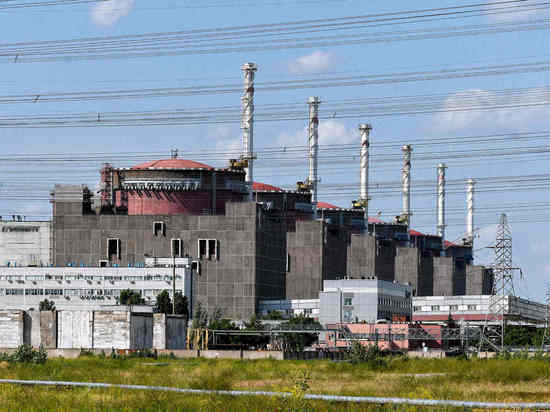 – While it was quiet in the morning, there are no new arrivals yet. The shelling took place at night, but not on the territory of the nuclear power plant, but in the area of ​​the thermal power plant.

– We are ready for everything as much as possible. We are well aware that the Zelensky regime has no brakes, these people are capable of absolutely anything.

Today we have a big Orthodox holiday – the Transfiguration of the Lord, this increases the likelihood that they can do something (since 2014 years, the Kyiv regime used to organize serious provocations precisely on the days of Orthodox holidays. – M.P.).

It is hard to say whether it will be a blow to a dry storage facility for spent nuclear fuel (ISSF), or a blow to the cooling system of a nuclear power plant, or something else. Therefore, we are in full readiness waiting for the distinguished guests of Zelensky to leave – UN Secretary-General António Guterres and Turkish President Recep Tayyip Erdogan.

Zelensky is a “drug addict”, dependent not only on white powder, but also on fame. He is used to being the center of attention, but lately he has been forgotten. Nuclear power plants are a reason to attract attention again. The arrival of distinguished guests is an opportunity for him to taste his 15 minutes of fame again.

– Two people have been arrested. One worked as a security guard at an open switchgear (OSG), the second worked as an engineer. Their cooperation with the SBU has been proven, and they deny that it was paid, but the facts say otherwise. At least one of them transmitted the coordinates of more than 10 targets. Moreover, he conveyed these goals by rumor, by conversation, without checking them, exposing his fellow countrymen, his colleagues to mortal danger. One of the gunners even suffered during the explosion himself, he was slashed with glass.

During the arrest, they immediately turned on the “little boys” mode, infantile teenagers, said that they did not understand what they were doing, and asked for forgiveness. At the same time, they helped strike at the city and the territory of the nuclear power plant with heavy artillery, knowing full well how this could end. Now they are being investigated. They are waiting for from 10 years in prison to life.

– It is impossible for a normal person to understand a maniac. They aimed at targets on the territory of the nuclear power plant, where they themselves worked, and lived nearby, their houses fell into a possible exclusion zone. Political Ukrainianism is some kind of psychiatric disease. There, logic, reason, conscience, brakes – everything is turned off. Some worse, dark sides of a person are included. Initially, there is a game of pride, passions, and then it comes to complete absurdity. Therefore, it is even scary to imagine what these people are capable of. They are capable of anything.

– Imagine a pill box with aspirin inside. DSFSF are concrete parallelepipeds of approximately the same shape, inside of which TVELs (fuel elements) with spent nuclear fuel are stacked with such pellets. They need special storage and disposal. Each such “pill box” is as high as a two-story house.

In total, there are 174 such “pillboxes” and about 4,000 fuel rods are located in them. If they get there, then there will be a release of radioactive materials and contamination of the area with radiation. It is clear that this is not a real nuclear explosion. This is the so-called “dirty bomb”. But there is a colossal amount of these materials and quite powerful means of destruction are used that can smash this storage and turn hundreds and thousands of square kilometers into an exclusion zone.

The second risk is that if the cooling system is interrupted, uncontrolled processes may begin at the nuclear power plant and the reactor will explode. Like at the Chernobyl nuclear power plant. Only here the scale of the catastrophe can be an order of magnitude greater. The territory up to Berlin and a significant part of the Russian Federation may be in the affected area.

– The nuclear power plant is important for the Kyiv regime to receive electricity, in case of its loss, the regime turns from an exporter of electricity, on which it earns currency, into an importer. And they have no money.

From a political point of view, they are implementing the scenario of provocation prescribed by the Anglo-Saxons: a catastrophe at a nuclear power plant and blaming Russia for this. This will make it possible to “pause” hostilities and stay in power at least on some stub of the post-Ukrainian space. The Zelensky regime is enriched by the war, earning about $30 million daily. Therefore, he acts according to the formula of political Ukrainianism, which I often heard there in government offices: “You die today, and I will die tomorrow.” Just as the downed Boeing in 2014 made it possible to stop the offensive of the army of Novorossia, so now they hope to get a respite due to the catastrophe at the nuclear power plant.

– The reactor can be shut down fairly quickly, but then it will take 2-3 years cool. These are tens of millions of cubic meters of water and a technologically complex and costly process. Under the current conditions, we will not even be able to remove spent nuclear fuel. Secondly, we need the IAEA to conduct an inspection there and draw conclusions about what really happened at the nuclear power plant during its operation and whether there were any experiments with radioactive materials during the time of Poroshenko and Zelensky. Judging by the hysteria in Kyiv, something like that could have taken place there.