At the Army-2022 military-technical forum, which is currently operating in the Patriot park near Moscow, a small-sized nuclear weapon. Artillery shells are presented at the stand of Rosatom, which is responsible for the country's nuclear complex. 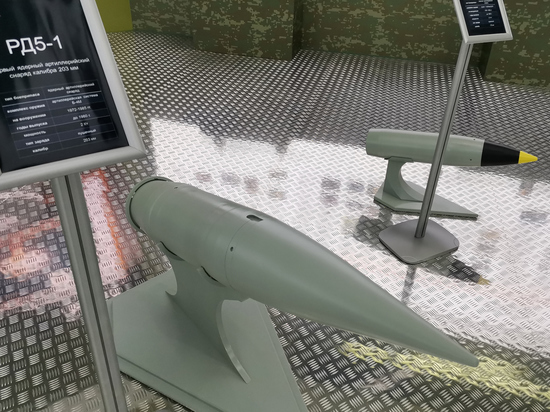 Tactical nuclear weapons do not fall under the restrictions of the Russian-American Strategic Offensive Arms Treaty. The United States and Russia have an arsenal of such weapons, but the parties do not disclose the number of their low-yield nuclear weapons. Russia has repeatedly offered the United States to agree on mutual control, but the States refuse.

One of the samples is the smallest RD4-01 barreled artillery nuclear munition. It was designed for the D-20 howitzer with a caliber of 152 mm. The power of a nuclear charge in TNT equivalent is 2.6 kilotons.

For comparison, the power of the American atomic bomb dropped on Hiroshima in 1945 is 13-18 kilotons, and the one that destroyed Nagasaki is 19-21 kilotons.

The RD4-01 nuclear projectile was in service with the Soviet army in 1981-1990 and was decommissioned during the perestroika frenzy.

The 152 mm caliber is the most common in the Russian army. This is the caliber of the 2A65 Msta-B howitzers. It is designed to destroy artillery batteries and destroy defensive structures.

The Giacint-S guns have the same caliber.

At the Rosatom stand, a nuclear charge for guns of a larger caliber is presented, although it is weaker in terms of power. This is the first nuclear artillery charge of caliber 203 mm RD5-01. It was intended for the B-4M artillery system. Its power is 2 kilotons. It was in service in 1972-1985.

The 203 mm caliber is used by such Russian artillery systems as the 2S7M Malka. This modification of the Soviet heavy self-propelled artillery mount 2S7 “Pion”. For its power, it was called a land battleship and was considered one of the most powerful guns in the world. For her, several low-yield tactical nuclear munitions were created, with which the self-propelled gun could fire at a distance of up to 45 kilometers.

Photo by Philip Kobelev < p> Under Gorbachev, under the Treaty on Conventional Armed Forces in Europe (CFE) of 1990, all 203-mm self-propelled guns were taken out of service, and nuclear shells were sent for recycling. By the way, this treaty, after several waves of NATO expansion to the east, completely ceased to meet the interests of our security. But the shells were disposed of.

Nevertheless, according to the open press, about 300 heavy guns still remain in the Russian arsenals. Some of them were seen in the zone of a special military operation.

It must be assumed that the technologies for creating small-sized nuclear charges have not been lost in our country. Obviously, to remind of this, nuclear shells were put up on the Army forum.