Not only aircraft carriers: the Chinese Navy scared the Americans

China has made a big statement about its naval ambitions by recently launching its third and most modern aircraft carrier. “Fujian” – the largest, most modern and most powerful Chinese aircraft carrier to date with a displacement of 80,000 tons – is called the “pearl” in the crown of China's military expansion, thanks to which Beijing has turned its navy into the largest in the world. 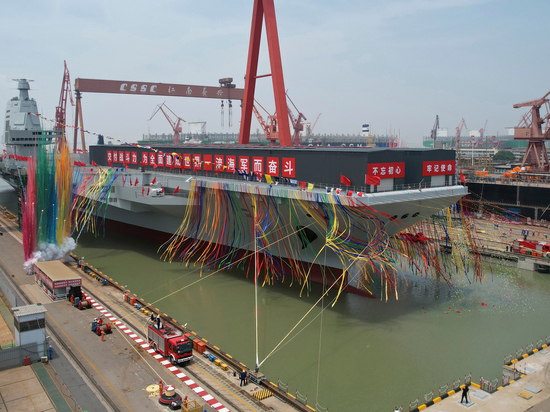 Fujian's new combat systems, such as the electromagnetic catapult launch system, show China is rapidly catching up with the United States, experts say, and will give the carrier the ability to launch more aircraft, faster and with more ammunition.

< p>As CNN says, that should be enough to give any potential adversary pause, especially given China's increasing assertiveness in its territorial disputes with Japan in the East China Sea, many Southeast Asian countries in the South China Sea, and its actions regarding the island of Taiwan, where Beijing defiantly refused to rule out an invasion to reunite with the “rebellious province”.

with noisy fanfare was clearly intended as a message to Beijing's rivals, analysts have so far warned against too much hype.

First, Fujian is likely to be out of service for another three to four years, said Karl Schuster, a former US Navy captain and former director of operations for the US Pacific Command's Joint Intelligence Center. And even when it is in working order, its size will make it an obvious target — any adversary will be keenly aware that the sinking of such an iconic ship would be as much a moral blow as a military disaster for China.

In addition, there is the simple fact that aircraft carriers, as impressive as they may seem, are not necessarily best suited to what experts consider the most likely conflict scenario in the near future, including clashes in the East and South China Seas and a Chinese invasion of Taiwan.

Essentially, experts say, “Fujian” may be China's largest ship, but that's probably not the biggest issue that US naval commanders are worried about right now.

Here are four types of ships in China's possession that arguably pose a far greater threat to US naval dominance than the latest aircraft carrier.

Threats include China's Type 055 destroyer. Launched in 2017 , these 13,000 ton stealth guided missile destroyers are considered by many to be the most powerful surface ships in the world.

The Type 055, large enough to be considered a cruiser by NATO standards, is equipped with 112 vertical launchers that can be used to launch everything from anti-ship missiles to long-range land-attack missiles.

“This ship , in particular, has a complex design, stealth features, radars and a large stock of missiles. It is larger and more powerful than most US, Japanese and South Korean destroyers, — told CNN a senior analyst at RAND Corp. Timothy Heath in 2018, when Beijing launched two warships in one day, a testament to China's impressive shipbuilding capabilities.

A March report from the US Congressional Research Service said at least 10 Type 055s have already been launched or are under construction.

The power of the type was highlighted in footage that surfaced on social media in April. They show one of them launching, according to naval analyst H.I. Sutton, hypersonic anti-ship ballistic missile YJ-21 — a weapon often referred to as the “carrier killer”.

The Chinese edition of Global Times called these missiles part of the country's defensive strategy. “If the US does not commit military provocations against China, including on the Taiwan issue, they do not need to worry about missiles,” — the message says.

Another cause for concern for the US military — Chinese Type 039 submarine. These Yuan-class submarines are near-silent diesel-electric boats with capabilities that US military planners have a hard time keeping up with.

Beijing has built 17 Type 39A/B submarines and plans to increase that to 25 in the next three years, according to a report from the Ministry of Defense. U.S. Defense Congress 2021 on China's military strength.

“Type 039 SS provide powerful defense in depth” in waters close to China, and they seem to be developing some opportunities for engagement. US forces further out to sea,” says Karl Schuster.

These submarines are equipped with Air Independent Propulsion (AIP), which means they don't have to surface as often to get the air they need to burn diesel fuel, which can then power their batteries.

« When running on batteries, AIP-equipped submarines are nearly silent, with the only noise coming from the shaft bearings, propeller, and hull fairing. wrote US Navy officers Michael Walker and Austin Cruz in a 2018 US Navy report.

The development of Chinese submarines comes just at a time when the US Navy is experiencing problems with anti-submarine weapons. Commander of Naval Operations Admiral Michael Gilday told Congress last month that the Navy wants to scrap nine of its Littoral Combat Ships, one of the newest ships in the US Navy, because their ASW systems “technically didn't work.”

Commercial ferries — this is also a cause for concern for the US military. To invade Taiwan, China would likely need to deploy an invasion force of hundreds of thousands of men — some analysts suggest that more than a million people will be needed.

Various analysts and US government reports have concluded that the People's Liberation Army (PLA) navy is not up to the task. But China has a huge fleet of civilian ferries that can be quickly converted to military use, and some say they were even designed to do just that.

“China's largest ferry manufacturer publicly stated in 2015 that one of its largest ro-ro ferries was built for both military and civilian use, and one of China's largest ferry operators is similarly described as having a dual civil-military development. philosophy», — wrote Thomas Shughart, a former U.S. Navy submarine commander and now fellow at the Center for a New American Security, in a 2021 feature for War on the Rocks. He added that civilian ferry companies operating in the Yellow and South China Seas have already been organized into subsidiary units of the PLA.

According to Shugart, the tally of the numbers was staggering. According to him, the use of civilian ships will give China an additional 1.1 million tons of displacement. This figure is more than three times the displacement of all Chinese landing craft combined. If China uses the Hong Kong ferries, it could get an additional 370,000 tons of shipping, Shugart said.

Is that enough to take Taiwan by force? It's hard to understand. But Shugart said it answered one question. “How many transport ships does the Chinese military have? Very likely, more than you think.

Ferries — are not the only supposedly civilian vessels that military planners have on their radars. Experts also accuse China of building up a maritime militia of more than a hundred vessels believed to be engaged in commercial fishing to enforce its desires in disputed seas. According to the Center for Strategic and International Studies, the militia, whose existence Beijing denies, consists of at least 122 courts and probably 174.

But the real number could be even higher, CNN claims. Militia involvement was suspected by various experts when more than 200 Chinese fishing boats filled the waters around Whitsun Reef in the South China Sea in early 2021. The reef is claimed by both China and the Philippines, which has described the presence of the boats as a “clear threat”; provocative actions.

“The Marine Militia of the People’s Armed Forces don’t fish, — Karl Schuster told CNN last year. — They have automatic weapons on board and a reinforced hull, making them very dangerous at close range. In addition, their top speed is around 18-22 knots, making them faster than 90% of the world's fishing boats.

The militia consists of two main parts: professional militia boats and real fishing boats used by the Chinese military under a subsidy scheme, according to a November report by the Asian Maritime Transparency Initiative at the Center for Strategic and International Studies (CSIS).

In the CSIS report it is said that professionals are leading actions such as harassing foreign drilling vessels or blocking foreign fishing vessels, and subsidized fishermen are exerting numerical pressure. And with the world's largest fishing fleet, China has plenty of reserves to tap into.

However, none of this means that the launch of the USS Fujian is not an important point. As in the United States, aircraft carriers will eventually become the backbone of the PLA's navy and a symbol of what the modern Chinese military is capable of, said Karl Schuster. should be seen in terms of what it portends, not in terms of its limited immediate impact, — Shuster said. — China has now launched three aircraft carriers and brought two into full combat mode at a time when the US Navy has struggled to bring one new aircraft carrier into full combat mode.

Karl Schuster was referring to the supercarrier USS Gerald Ford, which has been plagued by problems since its entry into service in 2017 (by then it was already three years late). The supercarrier has yet to make its first operational deployment, although that is expected this fall. Meanwhile, China is pulling ahead.

“They are building their fleet at a faster rate than the US and all its allies,” — Shuster is worried.