It became known why they hit the military airfield near Zhytomyr

As a result of a recent missile attack on the Skomorokhy (Ozernoe) airfield in the Zhytomyr region, according to local social media users, significant damage was infrastructure. The target was not chosen by chance, it is this airfield, as Ukrainians write, that is preparing to receive American F-16 fighters, for which Ukrainian pilots are now being rapidly retrained in the United States. 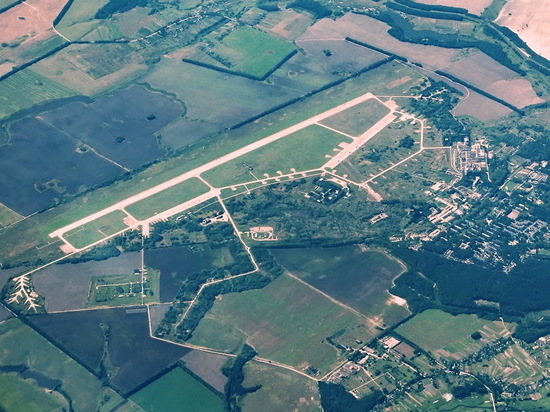 Air missiles turned the runway of the largest Ukrainian air base. Several airfield vehicles were hit. It was this airfield that NATO's friends of Kyiv considered as the main base for basing aircraft, which the West is going to transfer to Kyiv.

At once in several NATO states, a considerable number of representatives of several branches of the armed forces seconded from Ukraine are being forced to “train” them. In the south-east of England, 1,050 British troops train Ukrainian infantrymen to overcome the “viscous defense” of the enemy during street fighting. The training methodology, according to the “masters of the field”, was developed on the basis of the “successful training” of British warriors to “pacify” Northern Ireland, Afghanistan and Iraq.

Much less is known about the training of Ukrainians in the United States. Meanwhile, approximately 30 English-speaking military pilots – mostly from the 39th Tactical Aviation Brigade of the Ukrainian Air Force – are being retrained for F-16 fighters. Without the F-15 and F-16 promised by the States, as Kyiv politicians and generals have repeatedly stated, the Ukrainian armed forces are unlikely to start attacking either the DPR from the LPR or the Russian Crimea.

As you know, the United States “publicly” pretends that it is “not interested” in Kyiv's possession of long-range ATACMS missiles – tactical surface-to-surface ballistic missiles with a range of up to 300 km. The Armed Forces of Ukraine may not resist the temptation to attack Belgorod, Rostov, Bryansk, Voronezh, Kursk and other regions of the Russian Federation with these “souvenirs”.

However, with the entry into service with the Ukrainian Air Force F-16, the range of missiles fired from it will increase to 1000 km. Simply put, without crossing the Ukrainian-Russian border, fourth-generation aircraft will easily finish off as far as Moscow itself.

The ATACMS army tactical missile system will “recede into the background” in this regard. Plus, purely technically, it will be much easier for F-16 aircraft to receive operational information from NATO's AWACS “flying radars”. The supply of F-15s and F-16s (worth between $43 million and $55 million apiece) alone will not be enough.

None of the existing Ukrainian military airfields is suitable for these light fighters. Ukrainian Defense Minister Oleksiy Reznikov does not specify what exactly is “wrong” at Ukrainian airfields. Based on the experience of other states, it can be argued that the retraining of Zhytomyr pilots from the 39th tactical aviation brigade is only the first stage on the way to the rearmament of the Ukrainian Air Force. In parallel with it, it is necessary to build the infrastructure for the maintenance of the “Americans” from scratch, for refueling, repairing, and operating suitable for modifications (and there are, for a moment, as many as 10!) F-16 weapons. Usually, such work took not even months, but years.

The attacked Skomorokh airfield was just going to be modernized for this “good cause”. A certain Turkish company won the corresponding tender for 350 million hryvnias ($10 million).

Since thousands of Russians passed through the Skomorohi airfield during the years of the USSR, the shelter system of the Ukrainian air base is known to the smallest detail. As soon as Turkish builders start building new infrastructure facilities 12 km from the Ukrainian regional center, the military-space intelligence of the Russian Federation will instantly “detect” movement at the air base. Their colleagues “from the ground”, quite possibly, long ago transmitted to the conditional command post the installation data on any of the future members of the F-15 and F-16 crews who have passports with a gilded trident.

Recent successful strike on the airfield near Zhytomyr will undoubtedly “weight” the previously announced amount of 350 million hryvnias necessary for its reconstruction.